The global Covid-19 pandemic has affected every country’s economy. This article expands the influence the virus is having on the economy by the example of Estonia. 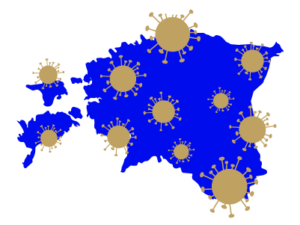 The worldwide pandemic has spread rapidly and seems to affect more or less every individual, inevitably, putting the global economy in a vulnerable situation. Causing economic mess coronavirus has led to a recession, where even the most sustainable orders undergo changes. While looking into pandemic consequences and accessing effect they are having on the economy of Estonia, it is essential to consider the country’s every distinctive economic feature.

The Estonian economy is regarded as open and stable and seeks to maintain the status. Characterised by innovation and adaptability, it can stand up against the virus. Nonetheless, since the pandemic rapid growth during the last spring, local media authorities are transmitting rich diversity of data regarding the Estonian market’s stability. In such a way, there arise questions concerning the subjectivity of an economic forecast. Whether the situation on the market is indeed that disastrous or is it about a certain perspective?

The first wave, or falling numbers

Data gathered for spring 2020 evidently indicate negative implications of the virus, nevertheless, not every business was affected. Statistics show that compared to 2019, the year 2020 first-quarter GDP has dropped by 0,7 per cent and stopped at 6,5 billion euros. For its most part, the virus affected energy, processing and industrial sectors, which could be explained by the decline in trade growth and household consumption. During the spring analysts were not so sure about the power of virus impact, they, however, empathised a decreasing trend in most fields of economic.

By the time of the second wave, the consequences of the first one became clearer. The tertiary sector, in particular, tourism, suffered income loss and approached decline. During the spring-summer of 2020 the decline in the prices was caused by lower demand. A range of leisure limited by the pandemic served as a reason for lowering prices of services, while rising unemployment has worsened the situation. Still, some businesses stayed strong.

News and analytics demonstrate the resilience of large construction companies and exportation. Meanwhile, some experts considered the Estonian market’s dependence on foreign demand, empathising the government’s limited ability to stimulate its own economy.

The second wave, or adaptation

At this stage, the government strived a lesson to be learned and prepared for the second wave. The forecast, however, was disappointing and predicted a stronger impact in the last quarter. GDP has dropped by 1,2 per cent comparing to 2019 and was 7.3 billion euros. The economic decline for its most part resulted from a decline in the first sector. Things were not getting better in hospitality, thereby compromising the market’s stability.

The economy of Estonia, however, has maintained its status and started to stabilise. The decline has decelerated and stopped pretty much in every sector. The processing sector and logistics were the first ones to recover. Despite limited export, the level of trade has increased due to electronics and chemical products.

All in all, for the past year Estonian economy, has fallen by 2,9 per cent. Considering the scale of the pandemic, it may be said that the Estonian government has shown its ability to an efficient adaptation.

Speaking of attention the Estonian government paid to the private sector, it is essential to note that the first half of the year was a challenge for both small and medium enterprises. Moving towards the end of the year, the government started to financially support such businesses. Having European commission approval, the government aimed to help the socio-cultural sector. Every willing could fill an application online.

Last but not least is the remarkable and independent success of Estonia start-ups worldwide at the height of a pandemic. For instance, Pipedrive, the leading CRM platform, has signed an agreement to receive a majority of investment from Vista Equity Partners, a leading global investment company focused on enterprise software. Similarly, Estonian based Tesla-rival Skeleton Technologies, received more than 40 million euros of investment last year. And also, three Estonian companies, specialised in IT, have joined their forces and signed a contract with the European Space Agency to fight against cyberattacks.

The global success of local companies along with the government’s successful stabilisation of a crisis proves the fact that there are no hopeless situations and highlights the necessity of competent decisions.

There is no wrong time for setting up a business, but you have to be sure you are in the possession of the right information, thereby ready to act. Company in Estonia OÜ will sort it out for you. Our professionals are happy to assist you in becoming part of the Estonian business environment and help in setting up the company in Estonia.